Remember, remember the 8th of December 1993. This was the fateful day that President Bill Clinton signed the North American Free Trade Agreement (NAFTA) Bill into a law. For all you psych majors who searched Amazon (AMZN) during Intro to US History, allow me to briefly enlighten you…

NAFTA was a trilateral agreement between the United States, Canada, and Mexica, which, upon enactment, would allow all importing and exporting of goods between the three nations to be free. Typically, when a company imports or exports a product to another country, they pay a tax, or “tariff” on that product. Enter NAFTA stage right, no tariff.

The logic behind the passing of NAFTA, at the time, seemed clear. Free trade makes it cheaper and easier for companies in one country to sell their product in another country which, in turn, benefits all countries involved. NAFTA, like a 3-year-old chess prodigy, was destined for greatness, but alas, the agreement was far from perfect.

With the financial burden of tariffs removed from the manufacturing and import/export process, companies were able to catch their breath. Prominent economists at the time predicted that NAFTA would create bountiful trade surpluses with Mexico and thousands of job opportunities would be created, however this was not the case. On the contrary, NAFTA led to U.S. trade deficits, not trade surpluses. This deficit continued through the decade following NAFTA’s enactment, taking a snack break in 2007, when the U.S. economy collapsed into the recession and demand for imports dropped off.

In addition to trade deficits, manufacturers recognize that cheap labor could be found in Mexico, rather than the U.S., and nearly 750,000 U.S. jobs are lost, mostly from the automotive, textile, and tech industries. Subsequently, the massive job migration suppressed wages. Companies used the Mexican labor shift as a threat to deter their employees from unionizing.

So you get the picture, NAFTA was severely flawed. Like my bedroom in my pubescent years, the agreement left the U.S. with “schmutz” everywhere.

On October 3, 2018, a new trade deal was struck to replace NAFTA. The new name, with sex appeal like a Ferrari, is the United States-Mexico-Canada Agreement, or simply, the USMCA. The agreement originates from a campaign promise President Donald Trump made back in 2016.

NAFTA 2: Return of the Trade, 2 NAFTA 2 Furious, NAFTA To The Future, NAFTional Treasure, the agreement is back, but with a complete makeover. Major policy changes include new legislation on cars, labor, environmental standards, intellectual property rights, and digital trade provisions.

The key changes (C Major —> D Major) in the agreement are:

President Donald Trump was able to rewrite a deal that he tweeted in August 2017 as “the worst trade deal ever made,” and replace NAFTA with the USMCA. He’s publicly proclaimed the revised version of NAFTA as “the most advanced trade deal in the world,” going on to explain 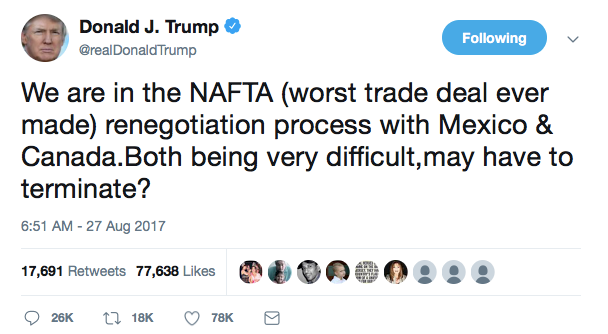 that the deal comes with a brand new 6.5’’ Super Retina custom OLED display and is truly the most advanced deal on the market.

Following the announcement of the agreement on October 1, 2018, US stocks climbed towards records, with the Canadian dollar and Mexican Peso reacting positively as well. The S&P 500 Index jumped 0.6% by 12:29 that day.

According to Raoul Leering, head of international trade analysis at ING Group NV, “Everybody is happy and why is that? Because the possibility of tariffs on a variety of Canadian goods would have a much more negative effect on world trade.”

All participating nations and their respective leaders are holding hands as this agreement comes into play. Trump on Monday showers Mexican President Enrique Pena Nieto and Canadian Prime Minister Justin Trudeau with praise for their assistance in coming together in a “great partnership.” These kind words from President Trump signal a turned cheek because, on several occasions this year, Trump publicly insulted Trudeau for being “meek.”

Only time will tell as to how successful the USMCA ends up being, but if it means Canadian milk in my morning, and typically late-night, cheerios, then I’m all for it.

The coronavirus economic shock has left some questioning the stock market. But…